2015: It wasn’t all bad. As we brace ourselves for 2016, now would be the perfect opportunity to look back, take stock and learn from the good work that was done around the world this last year…

These are just some of the incredible people who used creativity, ingenuity and bold ideas in 2015: to make change, to protect something, to bring people together, or to make our world that little bit better. This is a run-down of the year’s 9 best examples of everyday people power. 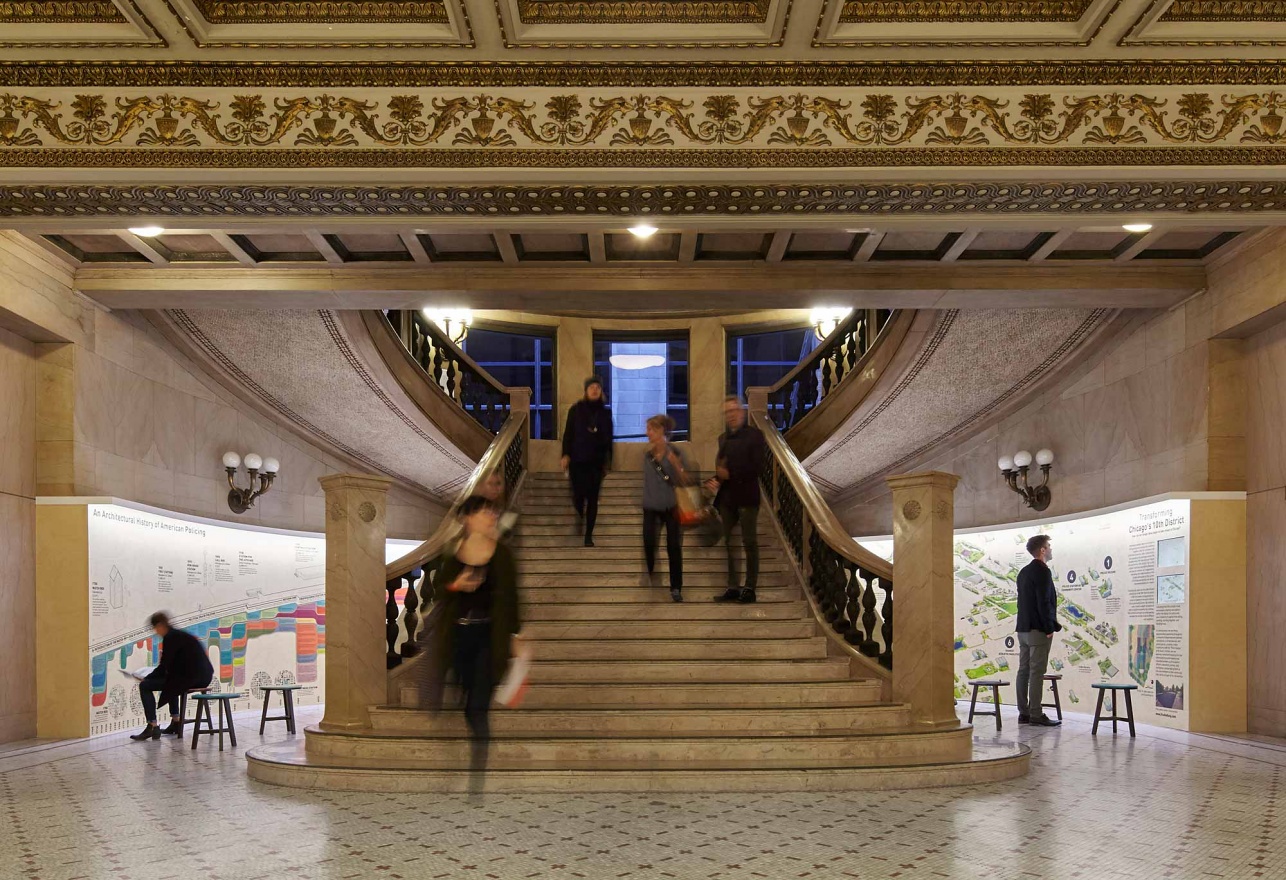 The city of Chicago made a bold statement with their inaugural architecture biennial this year. The event, entitled The State of the Art of Architecture focused on the social role of design. Exhibitors presented ideas, live projects and installations questioning the impact of our built environment in some of the biggest global issues, such as housing, climate change and education. Established global architecture practices such as Bjark Ingels Group sat alongside small, collaborative studios, such as London’s Assemble, in venues scattered around the city’s neighbourhoods, not just in the central downtown Loop. 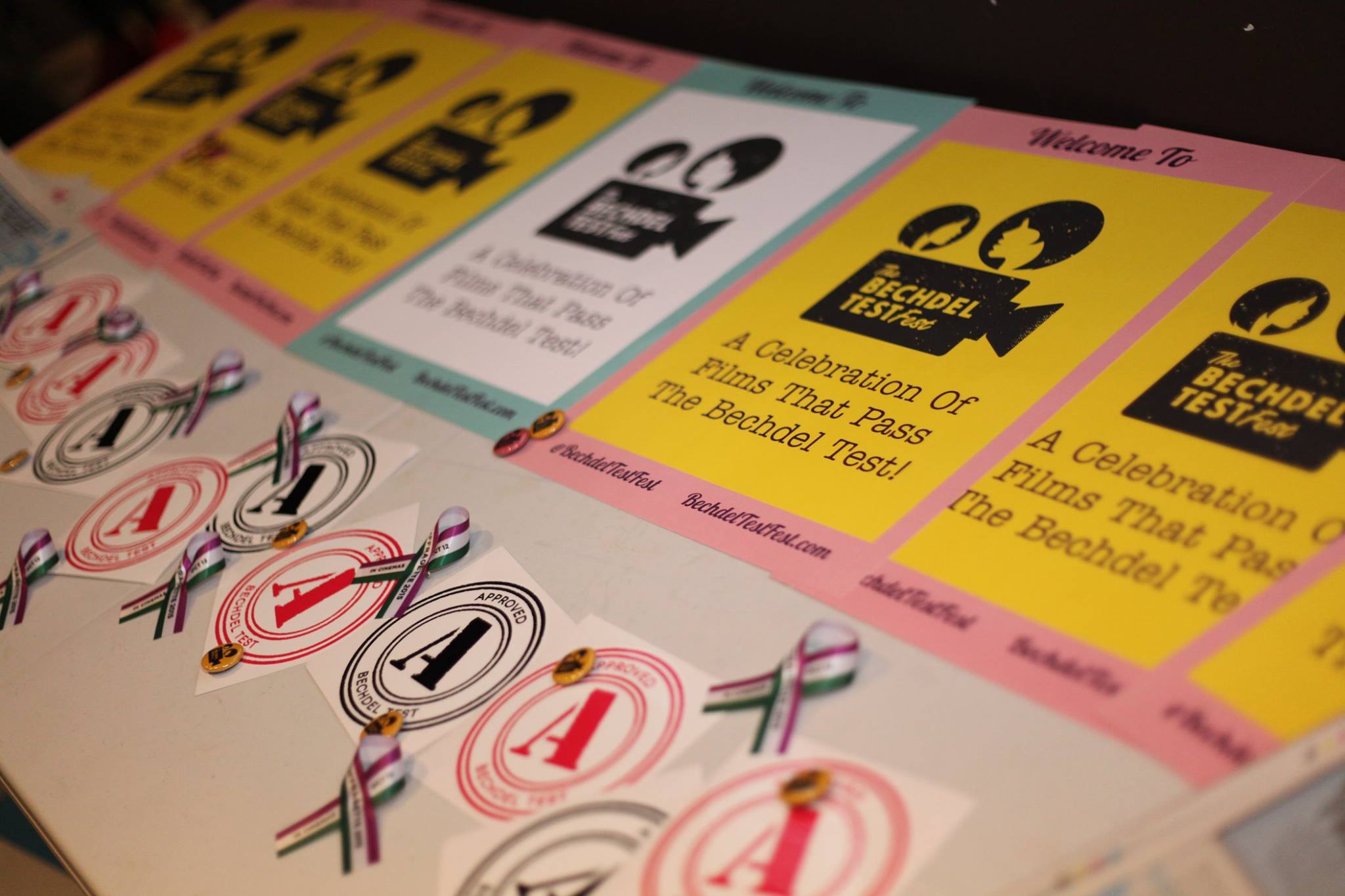 2015 was a big year for women in film. Here in London, one small but dedicated group of film buffs set out to get bums on seats to watch stories about strong, believable female characters. Originating from the tongue-in-cheek, three-question test; the Bechdel Test Fest was a year-long event, celebrating female representation in film, in every aspect of the industry.

With insightful and often animated Q+A’s following every screening, the aim of the festival is not only to open up the conversation about female representation in film, but to make it fun and accessible, to both male and female audiences (a recent double bill screening of Magic Mike was followed by a “heated” debate about the role of masculinity in feminist cinema).

This year we were reminded of the true potential of protest music, when the track Alright by Kendrick Lamar “became a bona fide #blacklivesmatter protest song” (iD/Vice). The track is from the album To Pimp a Butterfly, which tackles race relations and black pride in post-Ferguson America, and it was impossible not to be moved by the videos that emerged in October;  showing crowds of people chanting at the 20th anniversary Million Man March in Washington DC; singing the lyrics “we gon’ be alright” over and over again.

Many other artists have lent their support to the campaign, including Killer Mike, Dev Hynes and Janelle Monae, who produced Hell You Tambout; a protest song which she performed with the crowds at a #BlackLivesMatter march in Philadelphia in August.

In 2015, communities in America yet again called out for racial justice and equality; and thanks to the power of music, people from all over the world were able to hear the voice of the protesters, and stand by them.

This blog celebrates the great, creative ideas that happen when people come together to promote or protect something. No idea too ambitious; no community too small. Earlier this year my heart melted when I heard the story of the children at the Ebony Horse Club in Brixton, who held a meeting, had a brainstorm, and came up with ideas to help their tiny Shetland Pony Pedro, who was too small to see outside of his standard-sized stable.

The horse charity lacked the suitable funds to build him a new door, so the kids came up with the “Pedroscope“: a custom periscope which would temporarily be fixed to his existing door, so as not to leave him totally isolated.

They had no idea just how quickly their story would spread: Pedro “can finally stand and watch the world canter by after the viral YouTube video enabled the charity to be donated a special ultra-low door” (Telegraph).

2015 was a (long overdue) great year for LGBT rights: In May, Ireland became the first country ever to legalise gay marriage by popular vote, followed closely in June by the USA; Caitlyn Jenner opened up the conversation about transgender topics; and the world’s only openly gay Prime Minister, Xavier Bettel of Luxemborg married his partner.

The world’s media and arts communities stepped forward to show their support for the movement, and we saw a huge jump in the breadth of conversations about identity, sexuality, human rights, representation and labelling. While a lot of these conversations will remain uncomfortable and unfamiliar to many people for a while yet, it has been really exciting to see an increased presence of LGBT topics on our screens and in our mainstream media. TV shows such as Looking, Transparent, Banana and Tofu, along with mainstream films such as Carol and Tangerine, couldn’t have come at a better time. 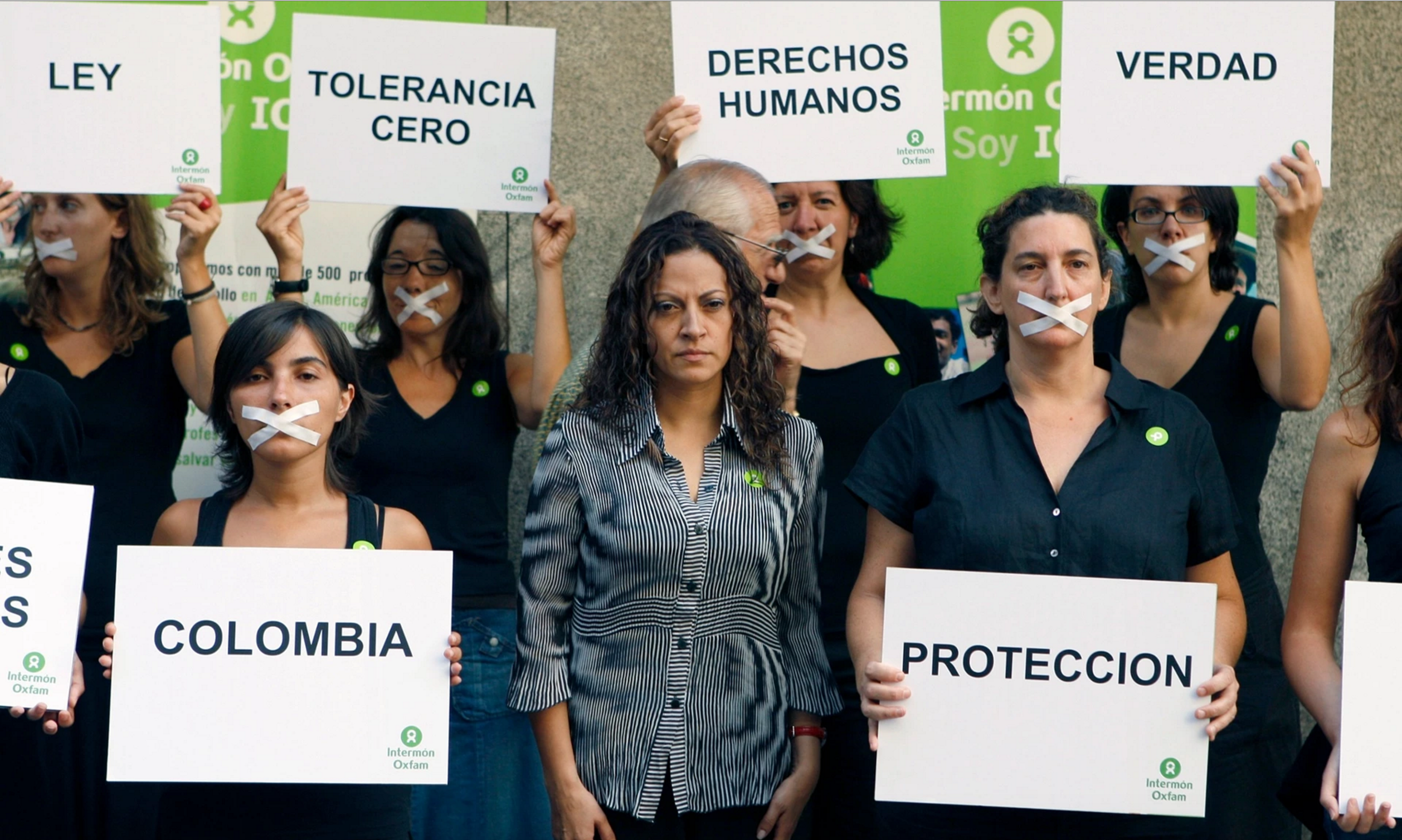 This year saw the establishment of Colombia’s first National Day for the Dignity of Women Victims of Sexual Violence, a move led by women, fronted by journalist Jineth Bedoya Lima. While this may not seem like that revolutionary an idea, you only have to dig a little deeper to understand that, in a country which is 50 years into a “conflict marked by widespread and systemic sexual violence”, this move is a big step in the direction of peace.

Raising awareness of the problem is not only for the benefit of the victims, it is also a huge statement to those who play a role in the conflict. In a country built on strong family networks and support systems, where women are the pillars of their communities, the act of standing up and identifying themselves as victims will do much to change people’s attitudes about the situation and the effect it is having on Colombian society.

This is not the first time that this approach has been used to raise awareness of, and change people’s attitudes towards, the conflict in Colombia. From 2010, the government worked closely with Lowe SSP3 to come up with creative propaganda campaigns to convince FARC members to demobilise, focusing on the traditional family support systems, which guerillas had left behind. 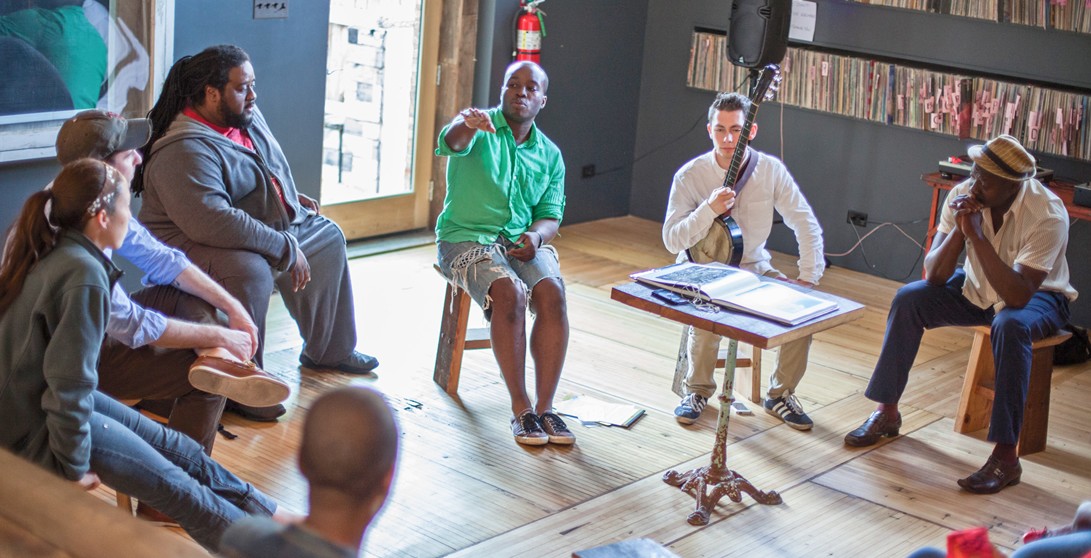 On Chicago’s South Side, famed for its musical and creative legacy as much as it is for its racial segregation, poverty and violent crime, one man is using the arts as a catalyst for social change.

For the last few years,Theaster Gates and his Rebuild Foundation have been buying plots of land in different neighbourhoods around the South Side, and transforming them into places of culture and collaboration: for example the Dorchester Art + Housing Collaborative, a rehabilitated block of 32 townhomes that serves as residences for artists and mixed income community members; the Black Cinema House; and the Stony Island Arts Bank.

Based at the Arts Bank, Rebuild Foundation work closely with community leaders, arts organisations and local residents to develop all their new sites and cultural programming. Each project has a committee made up of people from local businesses and community groups, and neighbours- literally neighbours- to ensure that the ongoing dialogue between user groups is led by the existing residents.

The beauty of this model, is that while their methods may not be surprising (injecting arts into an underinvested neighbourhood as a catalyst for economic growth is one of the most common forms of regeneration), they are doing so in a way that improves the South Side of Chicago for the people who already live there, not for those who will move in 5-10 years down the line. 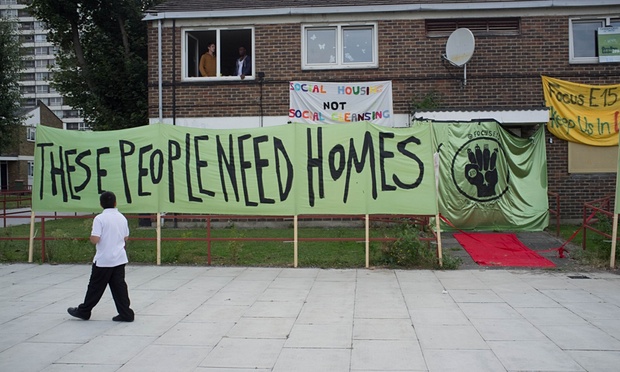 Anyone with an opinion on the London housing crisis should know about Focus E15. The East London-based campaign, which penned the slogan “Social Housing not Social Cleansing”, offers vital support to people who are affected by homelessness or displacement as a result of our current crisis.

The campaign was born in 2013, when a group of young mothers, facing eviction notices when funding was cut to their hostel for homeless people, came together to seek advice from their local council, only to be told that, following housing benefit cuts and lack of affordable housing in London, their only option for rehousing would be to accept accommodation as far away as Manchester, Hastings or Birmingham. (Focus E15)

They provide legal advice at their regular stall in Stratford, they organise protests and marches, and they campaign and network with other housing groups around the country; they are also extremely active on social media, where they organise regular social events such as workshops, comedy nights and gigs.

Focus E15 work relentlessly to not only support those who suffer, but also to educate the general public about their campaign; The housing crisis is an issue affecting so many different people, from all walks of life, and they know the importance of challenging the stigma of homelessness in order to gain support and make real, positive change, at a time when we need it most.

And if all that isn’t enough to convince you… What about the time they crashed the Property Awards in April? Surely that alone should earn them the second top spot?

In August, I spotted a local news headline, which, in hindsight, could have been one of the most important stories of 2015… One small community is going great distances, despite limited resources, to show the world the true meaning of the word ‘inclusive’ when faced with an influx of foreign immigrants.

The Asa Branca Favela in Rio de Janeiro, Brazil, is home to 8,000 residents, but has recently seen an influx of Haitian immigrants, many of whom have moved to Brazil in the hope of finding work in the construction boom leading up to the 2016 Games, driven by lack of opportunity and poor living conditions back in Haiti following the 2010 earthquake, which destroyed much of the country’s towns and infrastructure.

The Asa Branca Residents Association, led by Carlos Alberto Costa, has this year set out to improve the integration of the community’s new Haitian immigrants (approximately 150), seeing the arrival of the new residents as an opportunity to improve the sense of community within the favela. Costa collaborated with Haitian Dieuseul Duclosil on events and programmes to encourage integration; such as French and English language classes for Brazilian residents, and a Haitian-Brazilian ball, with music from both countries performed.

Asa Branca is an example of the important role that community plays in urban growth. With the influx of immigrants to their favela, the residents saw the change as an opportunity to adapt and allow the Haitians to shape the future of their neighbourhood, in a way that would benefit both groups in future.

Here in Europe, we could learn an important lesson from the Asa Branca story: To Costa and his community, it wasn’t enough to just “let” the Haitian immigrants live alongside them. Favela residents know all too well what it means to be displaced, and their willingness to adapt is not just an essential survival skill, it’s a basic human understanding, which they know will benefit them and their community in the long term.

Please notes: Image credits lacking due to a WordPress bug…