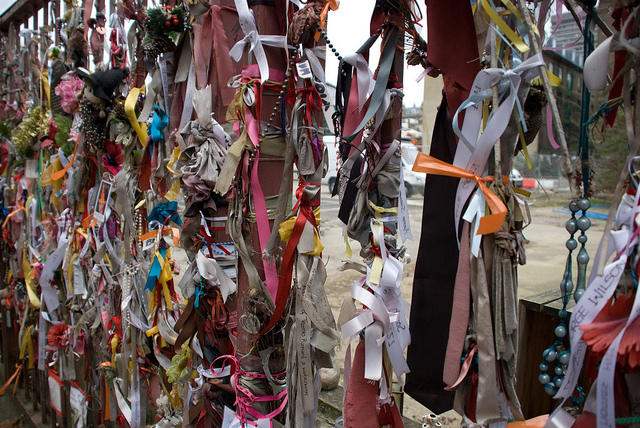 There is a small group of dedicated Londoners campaigning to save a tiny plot of land from commercial development. On Redcross Way, just off Southwark Street lies a disused, post-medieval burial ground. Closed over 150 years ago, many believe that this was a mass graveyard for up to 15,000 people, most of whom were paupers and prostitutes, now referred to as ‘the outcasts’. The area of Southwark was officially outside of the jurisdiction of the City of London, and so was home to many brothels. These women were licensed by the local Bishop, but did not qualify for consecrated burials.

Since the 1990’s, Crossbones graveyard has become a site of pilgrimage for people who visit the gates on Redcross Way. They come to take part in a vigil, bringing ribbons, candles and offerings for the ceremonial replenishing of the shrine. Many visitors come because they feel a connection with the buried, the outcasts of society.

This month I finally made the pilgrimage to a Crossbones ceremony and attended the Halloween vigil. There were many people in attendance, some newcomers such as myself, but also plenty of regulars. The members of the community knew each other well. They brought offerings and contributed to the service. In the final act, after we had all taken it in turn to read some of the names of the dead, (found using information from local archives), people made impromptu readings. One such reading was particularly moving as it was in memory of Steve Ash. An avid supporter of Cross Bones, he had been a friend to many of those present and had passed only a couple of weeks previously – it was particularly poignant to see the community honour a friend among the many outcasts.

I’ll admit that at the time, witnessing the various traditions and ceremonial acts, I didn’t know what to think. I often feel uncomfortable when taking part in someone else’s well-practised ritual, almost as a voyeur, not a participant. John Crow, who led the vigil, was a wonderful MC, guiding us through the different stages of the ceremony and encouraging us to participate. But it wasn’t until later that night, after I had left Crossbones, thinking about the evening’s events, that I truly realised the importance of the site.

The story is fascinating, but it is hard to cling to the cause because of the historical ambiguity surrounding many of the facts. But that’s beside the point. The reason so many of us fall for the charm of Crossbones is because of the people associated with it today. These people are campaigning hard. They meet every single month, carrying out vigils and looking after the shrine. I have never passed the site and not found one of them sweeping up the dead petals or talking to passers-by, telling them about one of London’s best kept secrets.

What stuck with me after the Halloween vigil was the passion of these campaigners, and their dedication to keeping the story alive. While the vigils give people an opportunity to show their respect and reflect on their own losses, I don’t think this is what brings them back, month after month. It is the sense of community. People who visit Crossbones feel comforted by it, and they hope that their tributes will bring some amount of comfort to the souls of those buried there, even after all these years.

I think everyone should attend at least one Crossbones vigil in their lifetime. Whether you believe in the rituals or not, by reaching out to the souls of the outcast dead, these people are sending a strong message to anyone who may feel like they might be the outcast living. London needs more people like them.

Please follow Crossbones Graveyard. Vigils are on the 23rd of every month. The petition to save the land and have it transformed in to a memorial garden can be found, along with all other information, at: